From a certain vantage point, you can’t quite tell what hangs on the white walls of Galerie Palü. At a distance, the prints look like a textured painting with jagged edges you can reach out and touch. Upon closer inspection, you realize the image is flat, yet monumental; it is a photograph by artist Ingo Rasp; coexisting in the same space of the gallery, in an uninterrupted conversation with each other, are the majestic oil paintings by artist Lukas R. Vogel. The two series of works in the exhibition have a shared subject matter; they are all representing the mountains of the Canton of Graubünden, in Switzerland. Supplementing the impermanence of his artistic gestures with the technology of photography, Rasp found an audience and created a body of work without peer. Ingo Rasp is an aerial landscape photographer with a background in architecture; this inform the series of photographs, Temporary Existence, where the subjects are the mountains of the Canton of Graubünden shot from a helicopter at an altitude of 3500m above sea level. The physical object in the photo is transformed into abstract and colorful compositions created respecting the topography of the mountains, revealing the colours of the landscape transitioning to summer. Orange, yellow and brown patterns represent thawing grass, the blue patterns are the streams of water while the white areas are still embraced by the snow.

Self-taught artist, his production is characterised by his fascination for the mountains, Lukas R. Vogel was one most important versatile and productive contemporary artists in the Engadine. The oil paintings in this exhibition spans from different time of his life, from Vor dem Ostgipfel des Piz Palü realized in 2004 to the most recent Nachmittag auf der Diavolezza, 2013, they all connect the idea of nature as the most sublime object, capable of generating the strongest sensations in its beholders. Vogel’s art is fundamentally autobiographical in the sense that he tended only to paint places intimately connected with the areas where he lived; this also serves to heighten the associative value of his paintings. In contrast to the monumental earthworks of our time, both artists reveal that their interest in the intersection of art and the natural world is with the ephemeral, the small-scale, and the non-monumental, and with place, not only as a geographical location, but as a process that involves memory, multiple narratives, ecology, language, and both scientific and vernacular knowledge. 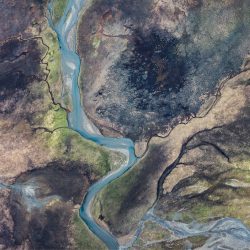